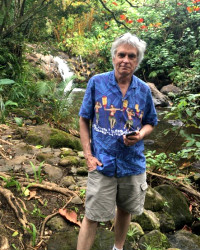 The Man Behind the Mic

Ellis Felker was born in 1949 in the small town of Marshfield, Wisconsin. His family owned a steel fabricating company where he worked in the summers with his brothers. He attended college in the turbulent late 60’s and early 70’s, graduating from The University of Wisconsin at Madison with a degree in Rural Sociology. And, yes, he was a hippie (and, for a short time, a Moonie!).

He began writing and taking photographs during his college days. In 1976 he founded Red Oak Publishers and has since published 8 of his books and hundreds of greeting cards which are sold all across America.

Currently Ellis lives with his wife and lots of animals on a small farm in the hills of Southwest Wisconsin, where he runs his publishing company and records “Ellis Felker Speaks.”